I had yesterday off and it was another beautifully sunny March day. A sunny Sunday. The husband took off for golf early in the morning so I slept in, ate plain ol’ toast with butter for breakfast, and then changed into my gardening clothes. You know what felt even more strange than baking St. Patty’s Day treats when it was 80 degrees outside? Doing yard work the day after St. Patty’s Day. I wish I could stop talking about this warm weather, really I do. But this is my blog and I’ll write what I want to. And unfortunately for you, right now I want to write about our awesome March weather. Again. 🙂

I started my little yard work adventure in our front yard. 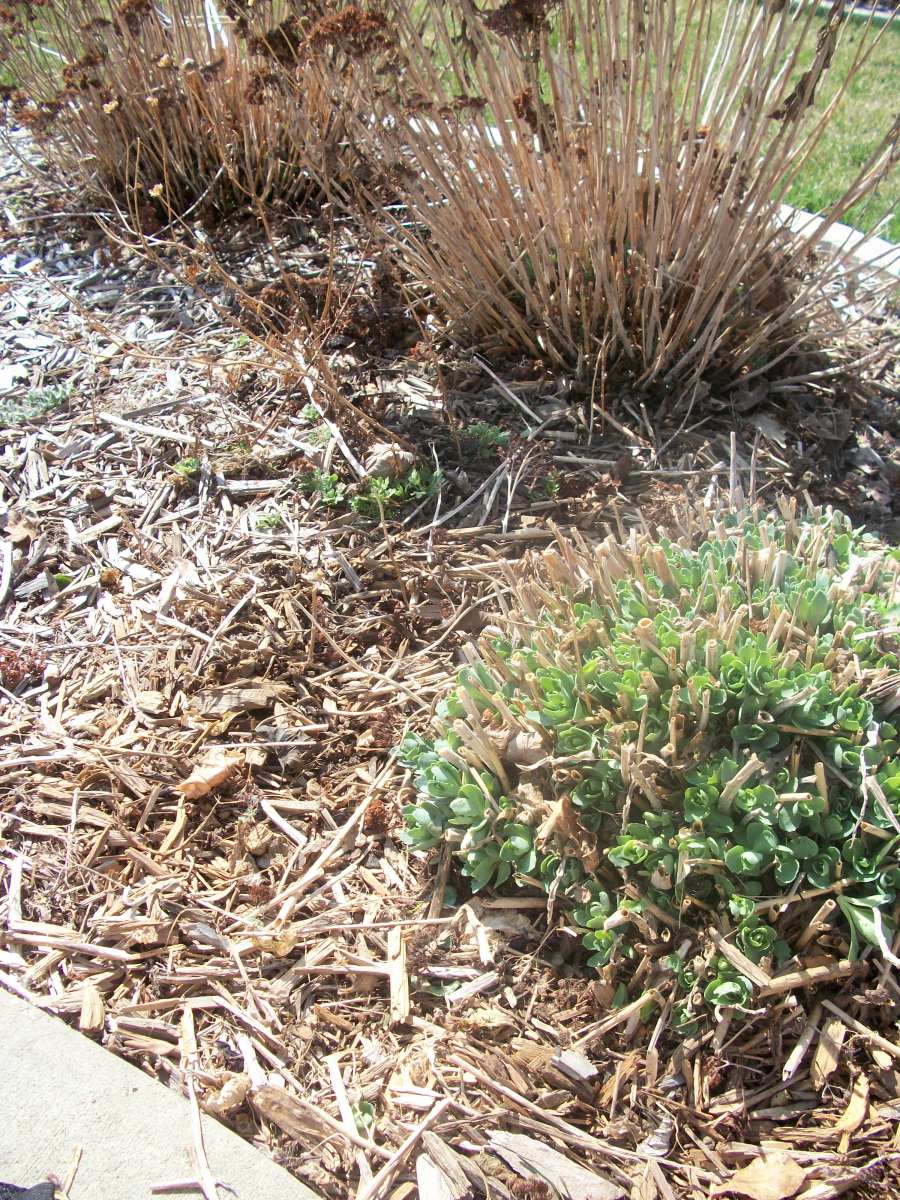 We moved into our house in June of 2010. We decided to just wait and see what flowers, bushes, etc. would pop up from the prior owners’ landscaping. Truth be told, we were too busy settling in to really care what the landscaping looked like. I started a new job the week before we moved in and was then in Chicago for a friend’s bachelorette weekend when friends and family helped Justin move us in. For real, I wasn’t even a part of the big move. I literally left our old townhouse on Friday and came back to our new house on Sunday. Luckily Justin had a few weeks off of work at the time and my awesome mother took time off to help get us settled. She did some painting, cleaning, weeding, and planting of flowers in a planter box in the back yard. Other than that, we just let nature take its course outside, maintaining the lawn and that’s about it. As you can see, the front yard had a few perennials, including a Rose of Sharon bush that I’m obsessed with (so are the bees) but it doesn’t bloom until end of June or July so I’ll share a pic then. Last summer we were busy with our wedding festivities along with the weddings and festivities of seven other weddings we attended/were a part of so once again, not much time for gardening. We threw down some bark, added some stone edging, planted some annuals, etc.

As last summer came to an end, I didn’t do any trimming or cutting back of plants/bushes. I just let the snow fall on everything. So yesterday, I did some pruning.

I cut back all of the dead parts of plants to allow the new green to come through. 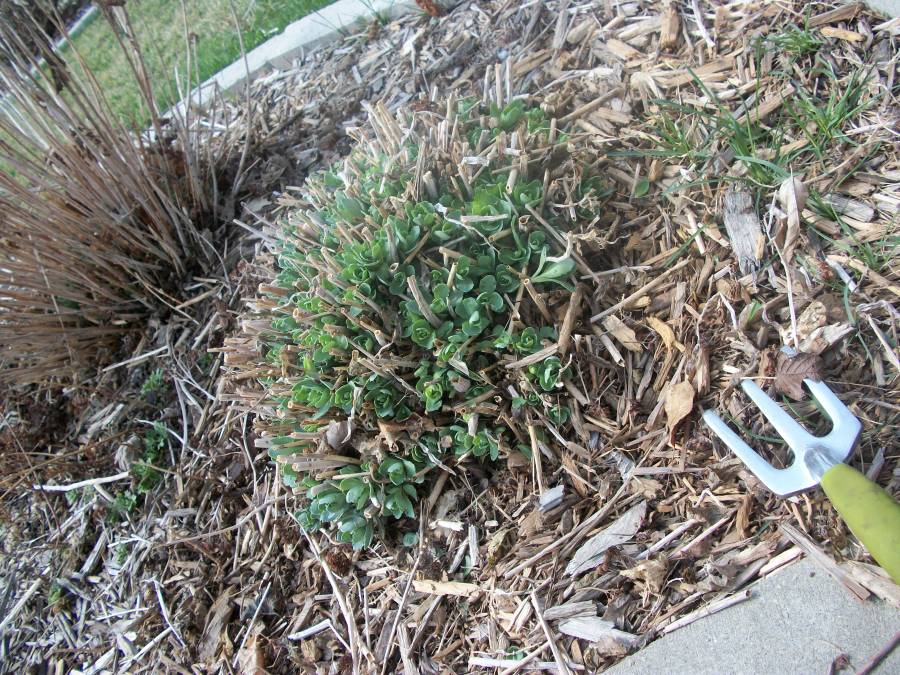 I got rid of that Anaheim pepper that stayed hanging even through winter, albeit mild. 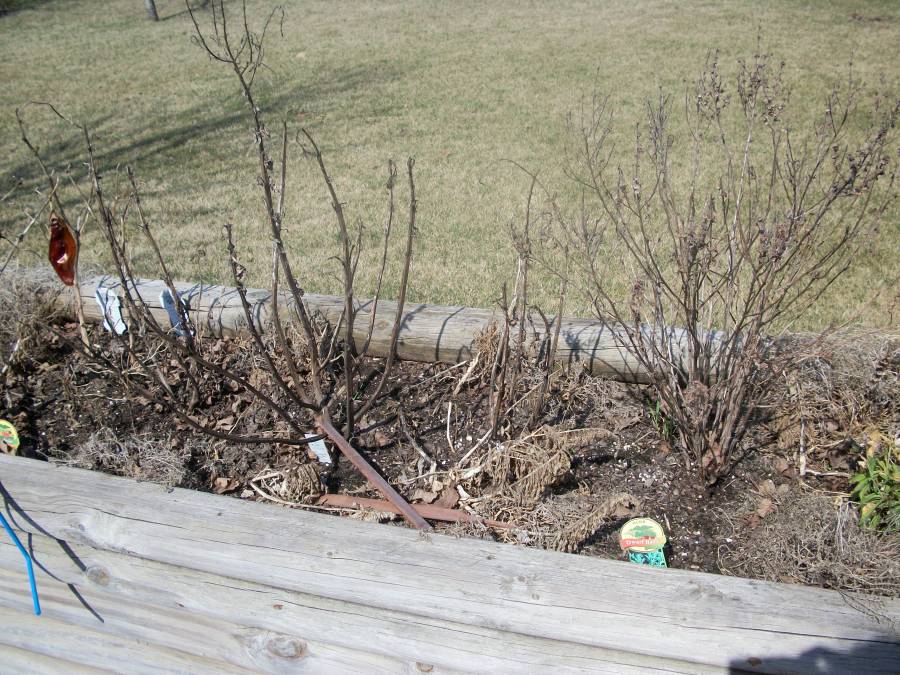 I got dirty. And gosh dangit, it felt great. 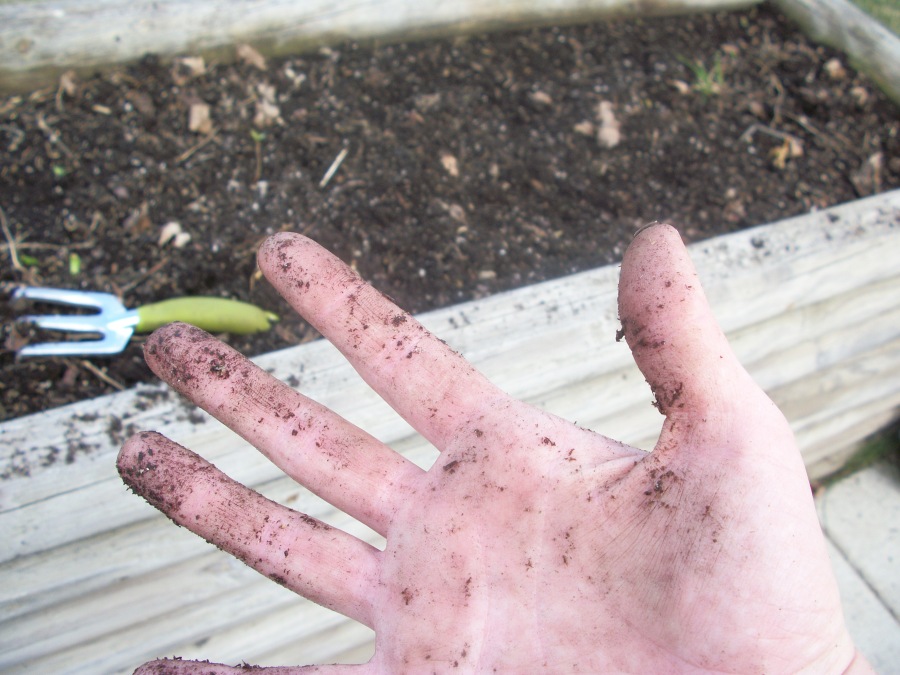 After cleaning myself up, doing some dusting and vacuuming, I went grocery shopping and prepped dinner for the husband and I. I followed no recipe, just marinated shrimp and mushrooms in olive oil, salt & pepper, and cajun seasoning, then skewered them with peppers (I cannot seem to figure out why I didn’t also marinate the peppers?) and threw them on the grill. 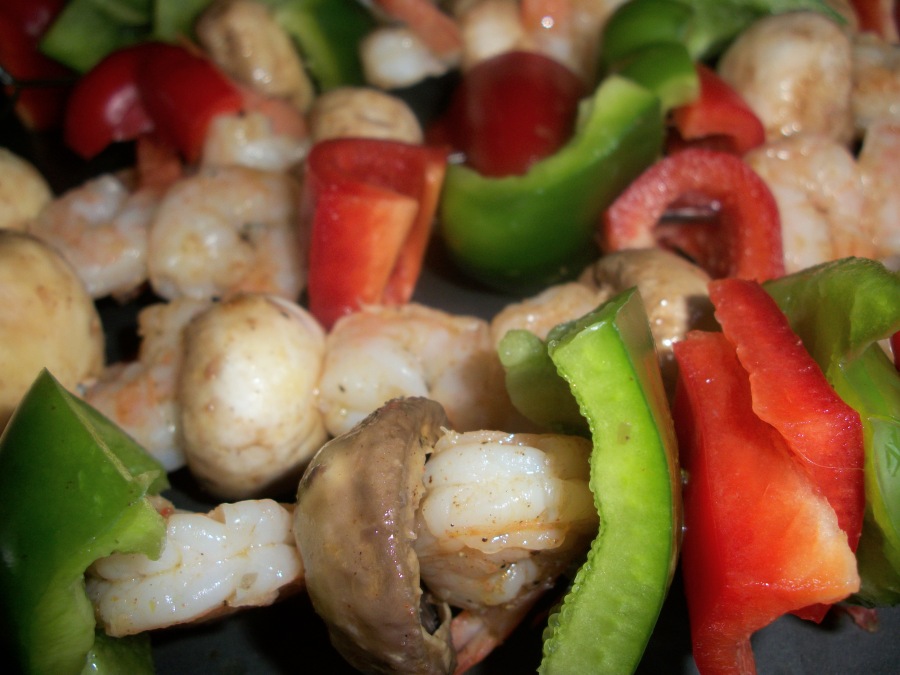 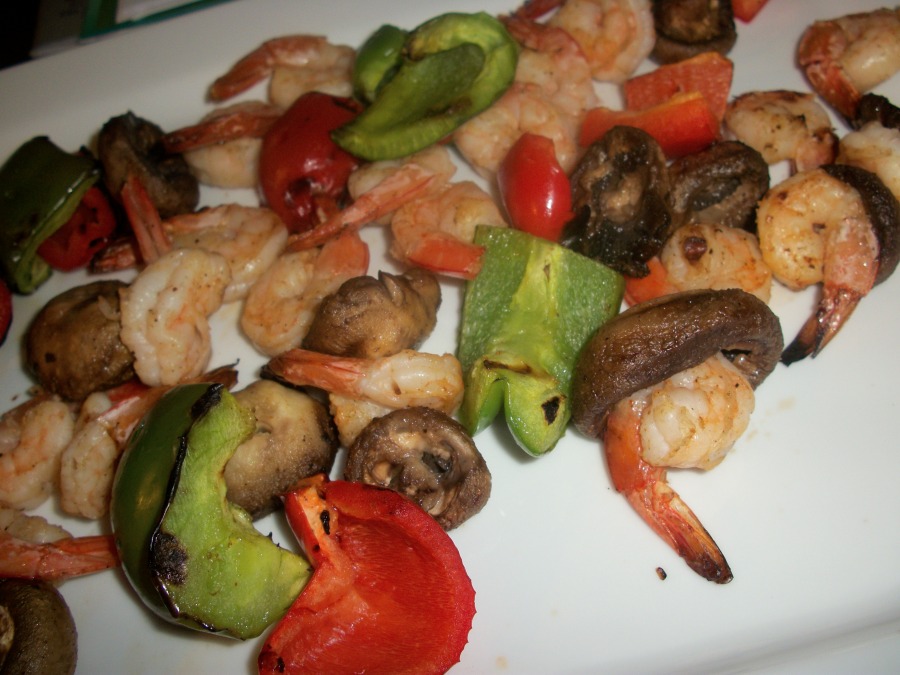 Hubby made himself some potatoes on the grill (okay, I ate some too) and I threw together a salad for myself. It looks pretty and it tasted good but I have some tweaking to do before I share the recipe.

The dishes were done, the couch was occupied, and I got a craving. Though I didn’t have some of the ingredients for “healthy” shamrock shake recipes I’ve been seeing everywhere, I did have a few and I made do. 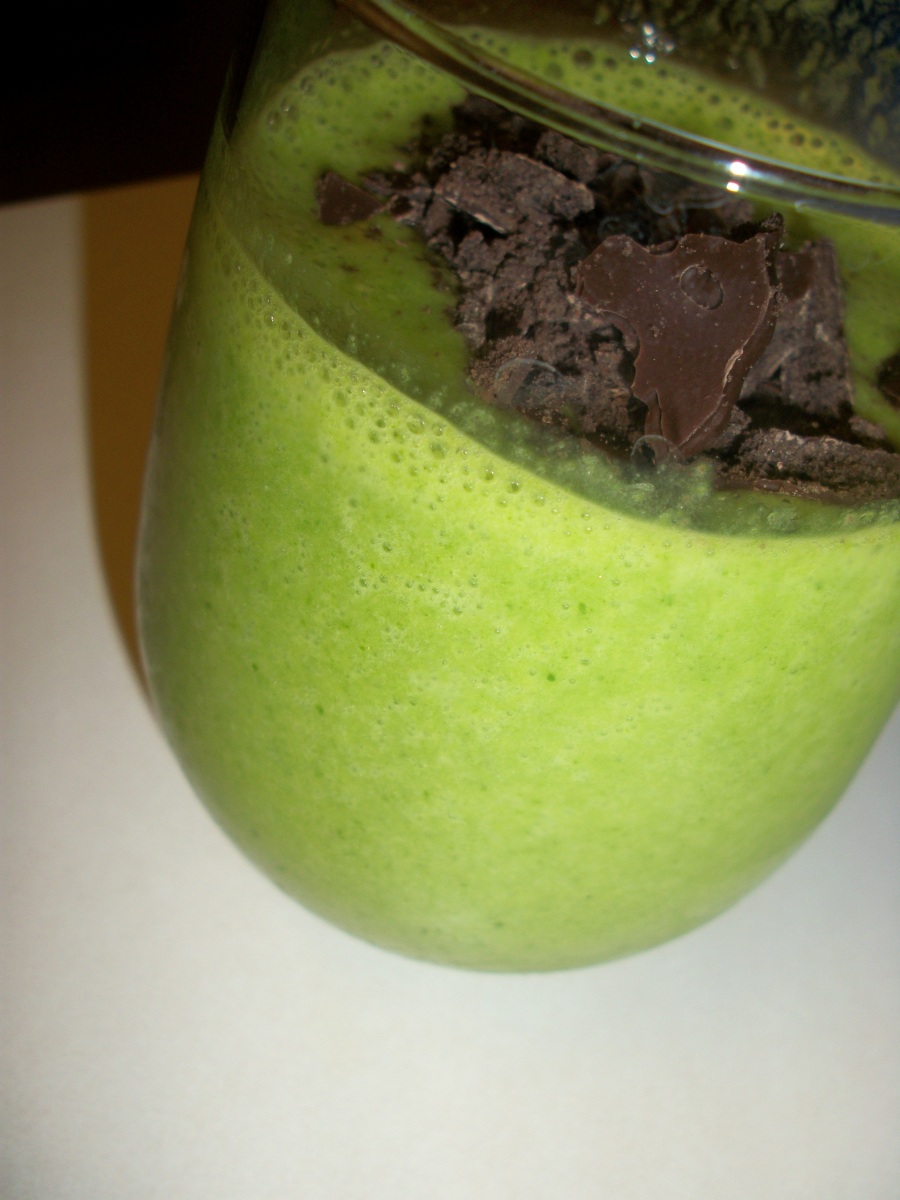 Want one? I know you do. Here’s what you’ll need:
-1 medium banana, sliced and frozen (mine wasn’t totally frozen so I added a few ice cubes)
-1 cup milk (I used unsweetened original almond)
-large handful of spinach
-a few dashes of mint extract
Just throw it all in the blender and let it whirrrr on up!
*I also crushed a few Grasshopper cookies on top of mine, but a swirl of whipped cream or a few chocolate chips would be good too.

Today brought about some much needed showers but the sun has been shining all afternoon and I’m stoked to see how green everything will be in the morning. I decided to jump on the Meatless Monday bandwagon so I have some yummy meatless pics coming up later tonight.

Do you eat meat? If not, why did you cut it out of your diet?

I’ve always been a meat eater (though I did cut out most red meat for 9 years) but I do have moments of guilt about it. I love and care about animals SO much but just have never been motivated enough to cut out meat. I do think it provides us with many essential nutrients and would most definitely do plenty of research to keep my body healthy if I ever decide to give it up for good.

“What are you doing Nolan?” “𝘞𝘢𝘪𝘵𝘪𝘯𝘨 𝘧𝘰𝘳 𝘠𝘖𝘜 𝘵𝘰 𝘴𝘯𝘶𝘨𝘨𝘭𝘦 𝘮𝘦.” ❤️ Social distancing isn’t so bad when I can stay close to this guy.
#throwback to three Thursdays ago (I love #alliteration ) when hopping on a plane for a long weekend in paradise was far less anxiety-inducing.
I didn’t know it was #nationalsonsday until after our sunny trip to the park this afternoon. I also didn’t know how much I’d love being a #boymom until these two came into my life, and now I can’t imagine it any other way!
“We just pull the ABC blanket up to our chins, and that’s how ya snuggle!” If you know anyone in need of snuggle lessons, just give this guy a call. 💕