Last night, while we were sleeping, a sneaky creeper used the garage door opener in Justin’s unlocked car in the driveway to open up our garage door & steal the keys right from my ignition. Does that make sense?

Here, let me try in a less run-on sentence fashion. My car was in the garage, unlocked, keys in it. Justin’s car was in the driveway, unlocked, no keys. The thief found the garage door opener in the center console of Justin’s car & opened up the garage door just far enough to crawl underneath & into the garage. They took my car keys, presumably to return later & either get in the house or steal my car when Justin’s isn’t parked behind it. We discovered all of this at 5am as Justin was leaving for work. Needless to say, I was up for the day at that point & I think the sick feeling in my stomach is finally subsiding. Nobody was hurt, nothing major was stolen & thankfully there was no house key on my key ring. Still, it’s creepy. A very similar occurrence happened to our next door neighbors. The cops told us there have been 6 robberies in our neighborhood this week alone. It’s a nice neighborhood, all residential, no apartment buildings. But apparently even the nice neighborhoods aren’t exempt from crimes. Sad, but true. My Friday lesson to you is to LOCK YOUR DOORS. House, car, etc. Lock ’em!

Funny side note: My grandma’s car was once stolen out of the church parking lot while she was at mass! How ironic, right?! The one place you’d think your car is safe!

Robberies aside, you can call me a quitter. But don’t say I didn’t warn you. Turns out I know myself pretty well. I woke up feeling great yesterday morning & was excited about my “banana shake” for breakfast. I forgot to freeze my bananas but figured a room temp banana blended with cold skim milk would still be fine. It was kind of wretched. I like bananas & I like milk but for some reason, this just wasn’t good.

I added a little cinnamon to help choke it down.

I started to feel run down while at work. I needed protein. I decided to have the same salad as the day before but with a big spoonful of chicken salad from work.

Delicious, once again. And the protein from the chicken made me a happy girl.

I decided to give the “banana shake” another try. This time with a frozen banana. Eh… tolerable again but I knew at that point I probably wouldn’t be doing any more of this banana & milk business for the day.

Justin got home from work early due to the excessive heat. He jumped right in the shower & promptly fell asleep on the couch. Poor guy. Working in this extreme heat is no cake walk, I’m sure.

He’s had ingredients for tacos here all week so he decided to finally do some cooking. He tried to bribe me to do it for him…no dice.

In the midst of browning his ground beef, he exclaimed “I want HuHot!”. My husband, I tell ya, always thinking about his next meal before he’s even finished his current.

I decided a bowl full of stir-fried veggies sounded pretty great & suggested my preferred “create-your-own-stir-fry” restaurant, Flat Top Grill. I knew I could get the real food I was craving, while still maintaining a fairly healthy plate. The taco meat was placed in containers & will make a great lunch for the hubs tomorrow. Off to Flat Top we go!

I filled my bowl with a little bit of brown rice, spinach, carrots, edamame, zucchini, pineapple & chicken. I used peanut, ginger & pineapple for my sauce & absolutely could not resist the amazing roti bread. I opted for the lettuce cups to make my dish into lettuce wraps. 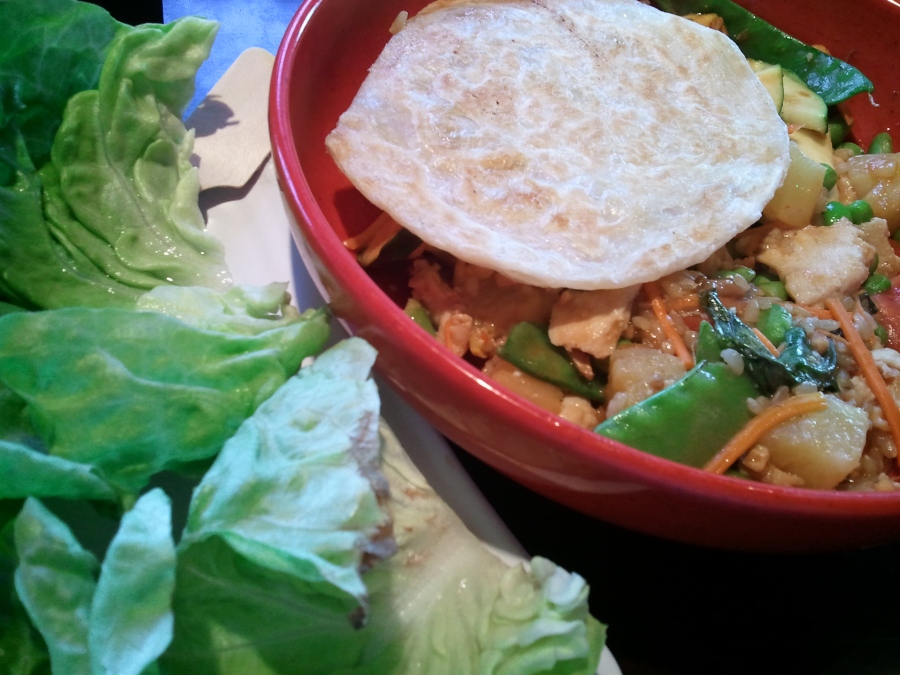 Soooo yummy! I felt completely satisfied & not too guilty.

Of course the ice cream craving hit on the ride home.

We opted for frozen yogurt. 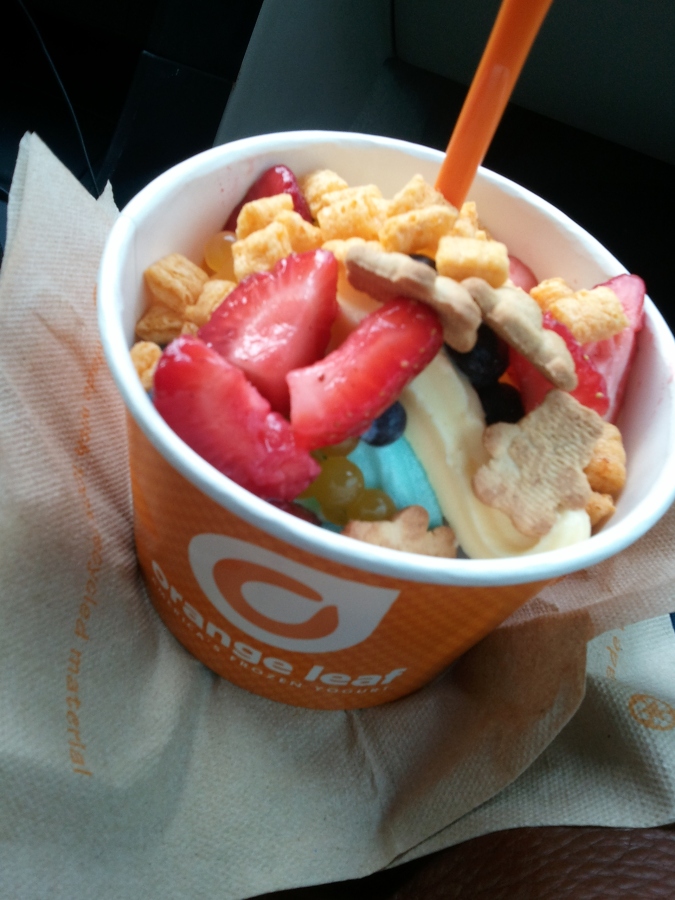 Necessary? No. Worth it? Yes.

Overall, I’m really happy with the few days I stuck to my cleanse. I think I’ll try to stick to the strictly fruits & veggies diet a few days a week to help balance out the days when I indulge a bit. I know that I need to find a happy medium between my favorite not-so-great-for-you eats & the healthy foods I also love but don’t eat as often as I should.

We have a fun weekend ahead of us & I’m going to attempt to not overindulge like I do most weekends. We’re grilling pizzas at my parents’ house tonight & my bestie is in town from Arizona so there will be drinking too. Tomorrow night we’re headed to Milwaukee for a Brewers game. Super excited for the next couple of days!

Have you ever been a victim of a robbery? This is the second time in two years that our cars have been “invaded” by someone other than us. Luckily nothing major was stolen either time, though this time is much more frustrating & inconvenient than the last. Once when I lived in a not-so-great neighborhood, my car window was broken & my stereo “system” was stolen. Also, when I was still in high school, some stuff was stolen out of my parents’ garage. My mom heard the guy come in so we were on watch. The idiot came back three times in a row until my dad chased him away in his skivvies. So funny!

Have a great weekend!