Do you know Corrie Anne? If not, you should check her out. She’s fun. 🙂

Her hubby recently finished grad school, but while he was still deep in studies, she treated him with cookies every Friday. I spend so much time baking cupcakes that cookies tend to take back seat in this house.

But I have a big cupcake project next week so I decided to change it up & bake cookies instead. Just like Corrie Anne!!

Yesterday was about 60 degrees & rainy. There was that fall chill in the air & I had the whole day off. There was nothing I wanted more than for our house to be warm & cookie scented.

I’m still in pumpkin mode so of course, these cookies involve pumpkin. Also brown butter, ginger, cinnamon, nutmeg, chocolate chips & caramel drizzle. P.S. Is it hard for anyone else to stop pumpkin with the “n”? I swear I type pumpkinG every time. 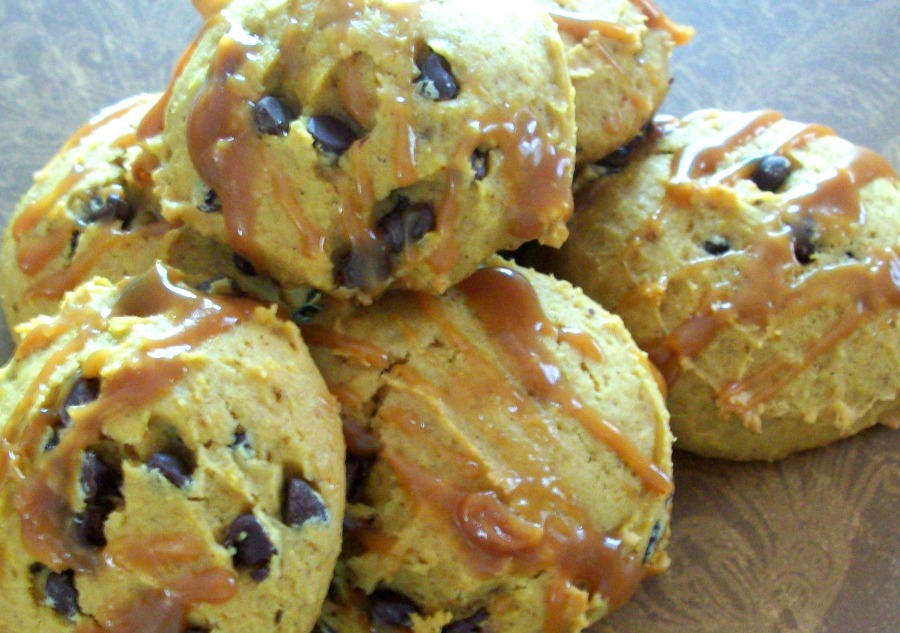 Our neighbors invited us over for a football party last night. The Packers were playing the Bears & they are Bears fans. It was basically like entering enemy territory so I had to bring goodies. On a football plate, natch. 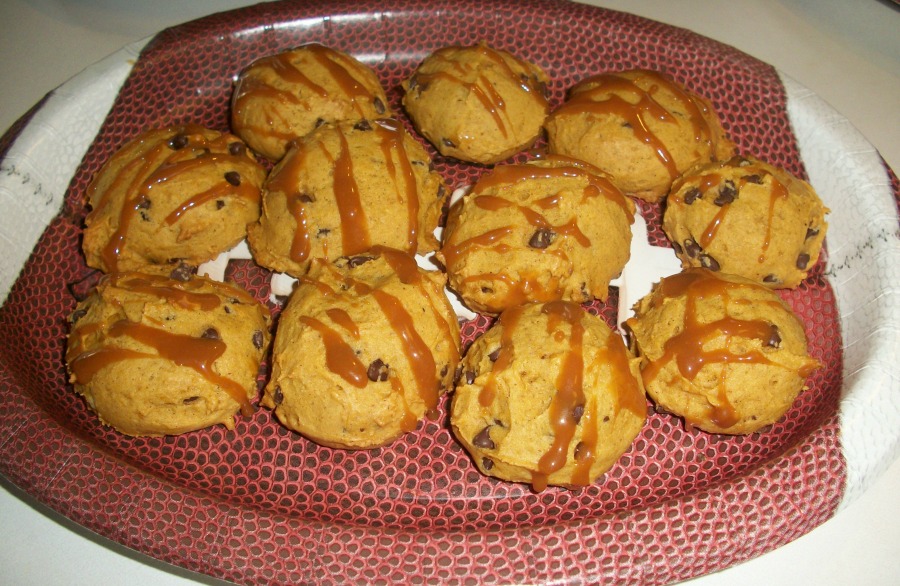 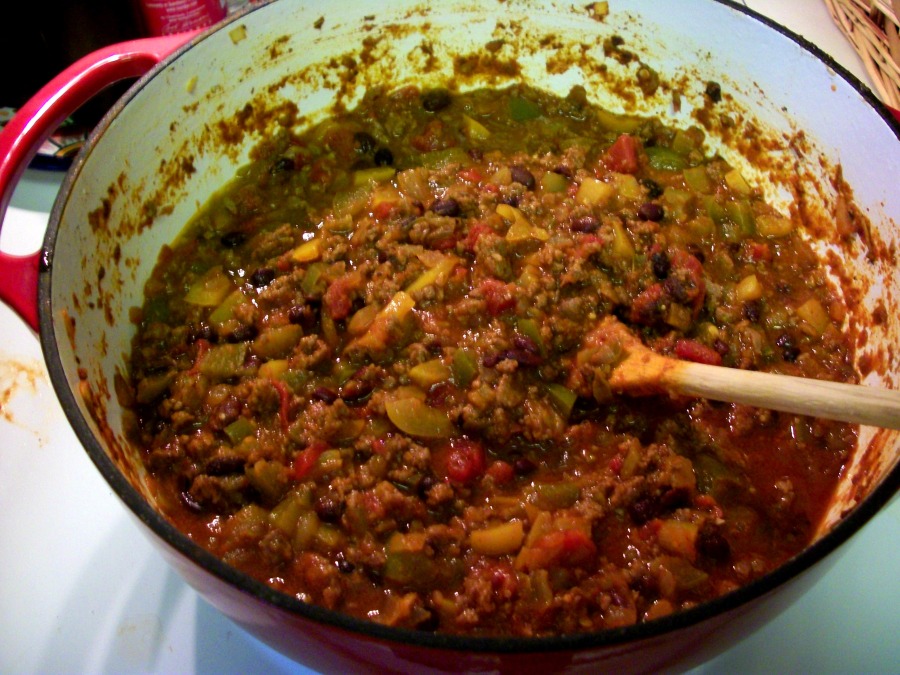 …Jalapeno Cornbread Muffins- “coincidentally” also yellow & green. I totally forgot to put eggs in this recipe. They weren’t awful without but definitely would have been better with. 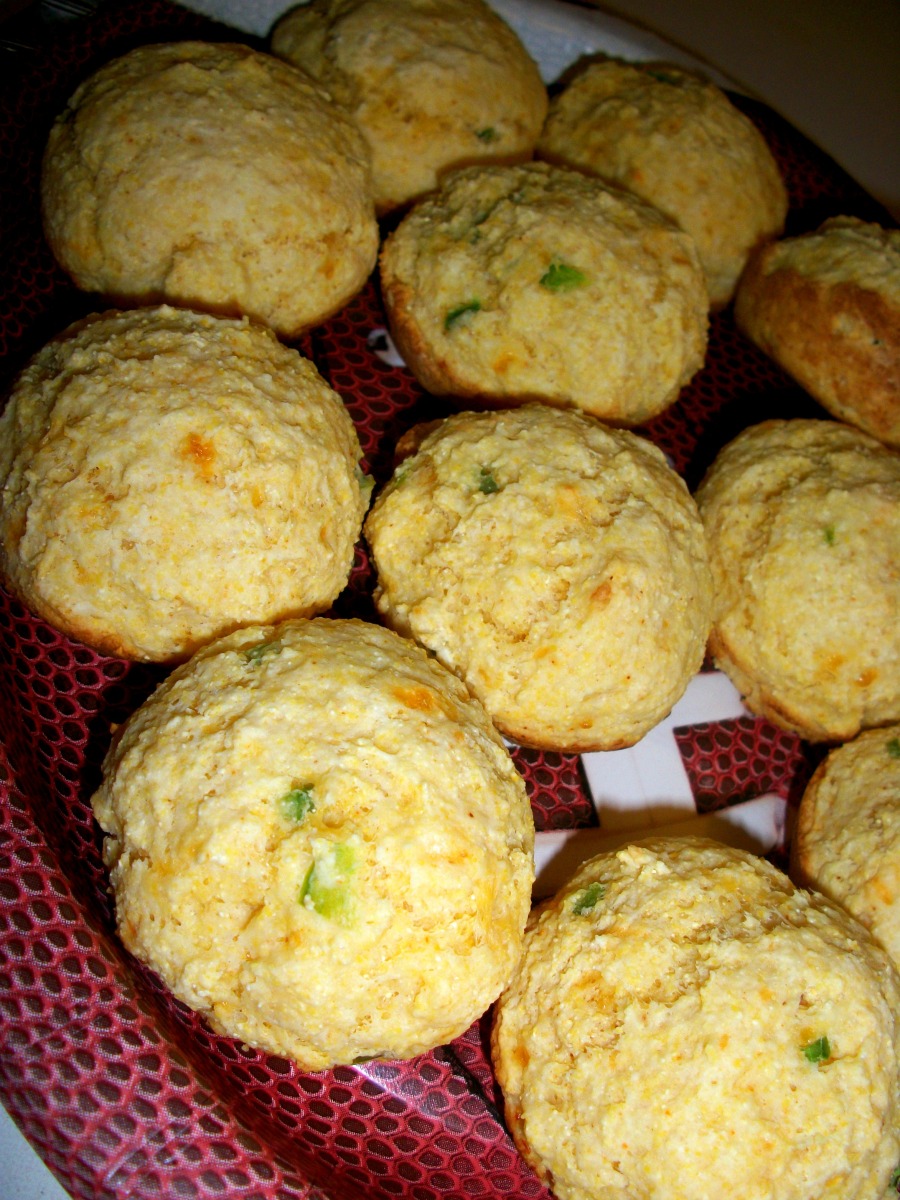 …and Crisp Autumn Sangria. Recipe to come next Thursday. 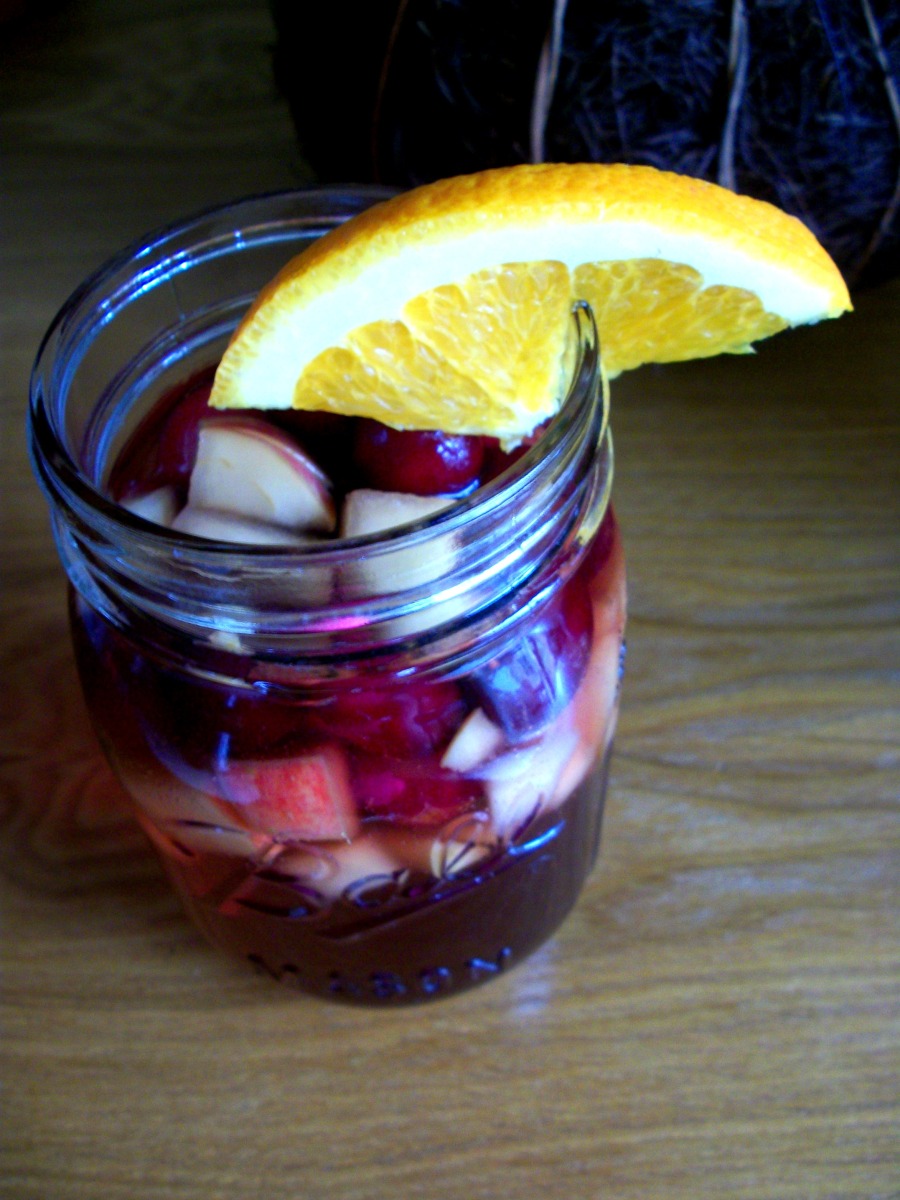 The chili & cookies were a huge success. It was a BYOB party so I’m really the only one who drank any sangria & I have plenty left for a family get together tomorrow. The best part of the party was our neighbors snuggly baby that I’m now feeling awful about breathing all over as I have a horrible cold. The bonus party favor: THE PACKERS WON!!

This morning we took Fielder in for a haircut & stopped at DD for breakfast. I realize DD isn’t a big deal to many of you, but this is Madison’s first so we had to try it out. My tastebuds are a little off from this cold but I was pretty pleased with my Skim Pumpkin Latte & Egg White Turkey Sausage Flatbread. Sure a 600+ calorie breakfast isn’t ideal but we had to try it at some point, right? 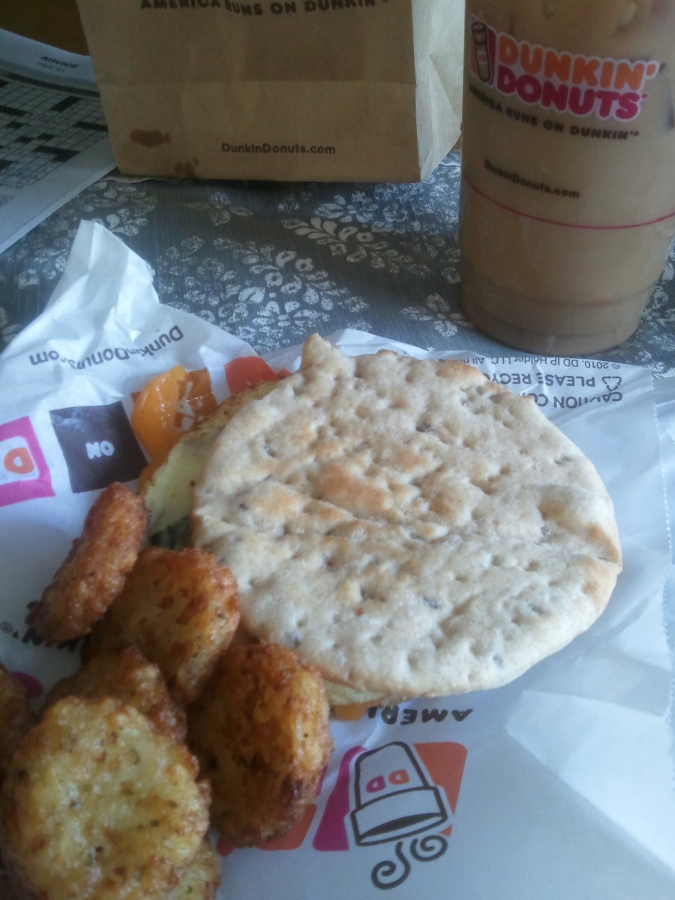 This house feels sooooo quiet and weird without Fielder so I can’t wait to go pick him up from the groomer.

In the mean time, this is where you can find me. On the couch, with a box of Kleenex, and Algebra homework. 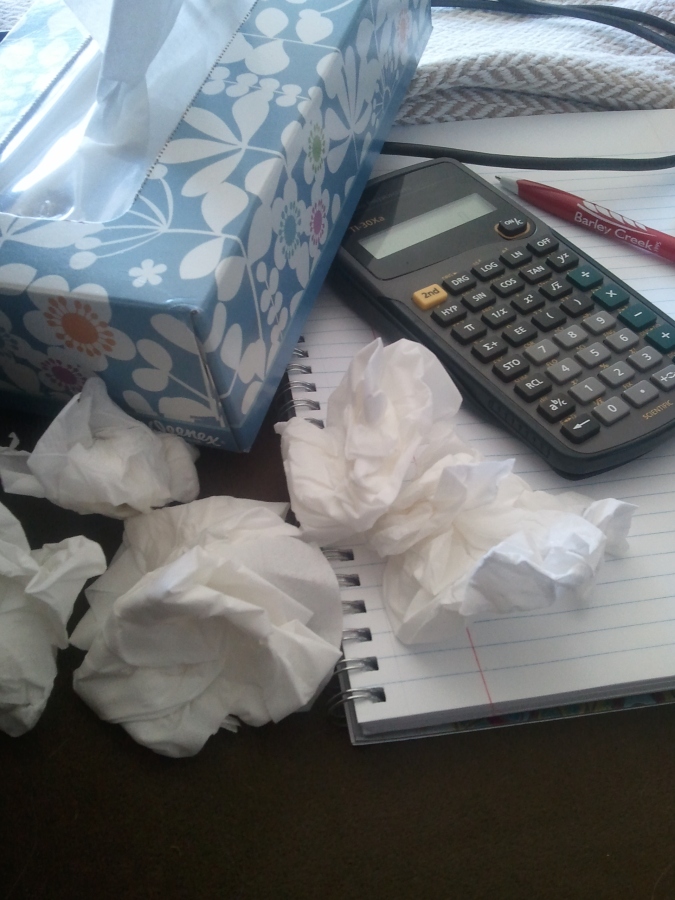 I work the closing shift tonight at work & for some really strange reason I feel like breaking out my old Turbo Jam DVDs. I’ll let you know if I have a cardio party with my old BFF Chalene later.

Hope you all have a super fantastic weekend!

Have you ever fallen for any workout DVDs while watching an infomercial? A couple years ago, right after receiving a bonus at work, I was snuggled up in bed on a Saturday morning & totally fell for the Turbo Jam infomercial. Before I knew it, I was cardio partying like nobody’s business. I actually really did enjoy the workouts, but as with anything, they got old after awhile. We are officially booked for a Mexico beach trip in February so it’s probably good that I start legitimately working out now…

Do you have Dunkin’ Donuts near you? It’s weird that we didn’t have one here before now, but I know there are some in the area. I’ve had their plain ol’ coffee & donuts before while visiting New York & Boston, but this was my first time actually looking at the menu & making a decision.

Last week determined that my husband was “essential” 😉 but prior to that I did know he could 𝕖𝕤𝕤𝕖𝕟𝕥𝕚𝕒𝕝𝕝𝕪 change the entire look and feel of our house with this beauty. I had the dream, he brought it to life, and because no carpenter finishes a project in his own house beyond 95% completion, we’ll probably never have that crown molding up top. Swipe for a few different angles (this thing is tough to photograph) and the college dorm tv stand situation we had before. I’m considering it a pretty decent improvement. 😊 #transformationtuesday #homeimprovement
He is my sunshine. And so is his (always too busy for a photo) brother. But also this sunshine is my sunshine today. ☀️🧡
“What are you doing Nolan?” “𝘞𝘢𝘪𝘵𝘪𝘯𝘨 𝘧𝘰𝘳 𝘠𝘖𝘜 𝘵𝘰 𝘴𝘯𝘶𝘨𝘨𝘭𝘦 𝘮𝘦.” ❤️ Social distancing isn’t so bad when I can stay close to this guy.
#throwback to three Thursdays ago (I love #alliteration ) when hopping on a plane for a long weekend in paradise was far less anxiety-inducing.