When my husband calls to tell me he’s on his way home from work because he’s ill, I know he means business.

Back pain turned into fever turned out to be an infection and the hubs is not feeling well. At all. I can tell because he’s constantly whining. Constantly.

I’m not a mean wife. Not at all. I feel horrible that he’s in so much pain and I’ll do anything within my power to make him more comfortable. Unfortunately, there’s not much I can do for him at this point, and oxycodone and ciprofloxacin haven’t really started doing their job yet. So what do you do for an ill, whiny husband? You make him soup, of course! And allow him to moan and groan and whine as much as he wants without complaint. Except, of course, for here on this little bloggity blog that he doesn’t bother to read.

I’ll admit, this soup is way more up my alley than his, and he really wasn’t all that into it. However, he also said that the bacon I cooked (okay, microwaved) for garnish smelled disgusting. He loves bacon and the way it smells. Futher proof that the boy is just not himself. As if not eating for two days wasn’t enough proof.

I, on the other hand, dig this soup. And I think you might too. The ingredients are simple. The method is slightly complicated, but as my mother recently pointed out when she made these, I tend to enjoy laborious baking/cooking projects. That being said, you could totally skip the fuss and make this a chunky soup. It would still be pretty scrumptious, I presume.

My original plan was to make a creamy chicken wild rice soup for my boy. But then I decided to health it up a bit. I know the term superfood is ambiguous, and pretty much every food is claiming to be a superfood these days, but I made a few swaps to turn this into a healthified version of creamy chicken wild rice soup, using some of what may or may not actually be superfoods. Who decides these things anyway?! 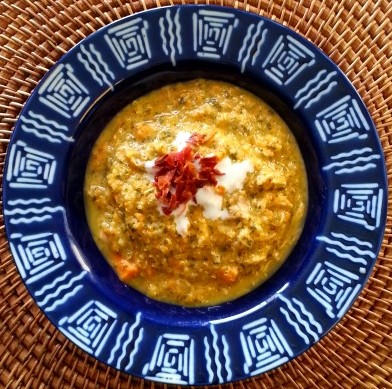 Directions
-Heat oil in large stockpot or Dutch oven, over medium heat. Add onion, carrots, celery & kale. Cook until onions are transluscent and kale is dark green and wilted.
-Remove kale and vegetables from pot (it’s okay if you miss some of the veggies, just try to get all of the kale) and place in vessel of food processor or blender.
-Meanwhile, add broth and sweet potato to stockpot. Allow to simmer for 5-10 minutes, while processing kale mixture until as smooth as desired, adding a few splashes of kefir to help smooth.
-Remove potatoes from stock pot with slotted spoon (you don’t want the broth) and add to food processor (with or without kale mixture is fine). Puree potatoes, gradually adding additional kefir as needed.
-Return kale mixture and potato puree to broth. Add remaining kefir, milk and seasonings, including bay leaf.
-Allow to simmer for about 10 minutes. Mix in chicken and cooked quinoa.
-Top with desired garnish. I used a drizzle of kefir and a sprinkle of extra crispy bacon. Pumpkin seeds, pistachios, or Greek yogurt would be great too! Maybe even some maple syrup?
Notes: This could easily be made vegetarian without the chicken and optional bacon.
I used some milk, rather than all kefir, as kefir has a slightly tangy taste. I wanted just a hint of actual milk flavor.
You can see that I did leave some chunks of potato, totally not a big deal and makes it kind of fun with the different textures.
And finally, if you have an immersion blender, color me jealous and do all of the pureeing right in the pot. 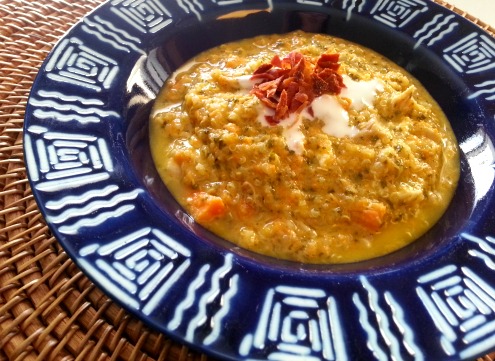 Hope you’re all having a postively lovely weekend!