People say it all the time. Babies come when they’re ready. In most cases, that time is around 40 weeks. But when you’ve got more than one baby on board, things tend to happen a bit sooner. Our babies decided 34 weeks was their time to join the real world. Here’s how it all went down.

Warning: This is gonna be real wordy…

Wednesday, June 3rd – Justin returned from his five-month work stint in Pennsylvania. Yes, I spent the final five months of my pregnancy in a “long-distance marriage”. We made it work with once-a-month visits, Skype, texts, and lots of Snapchat so we could see little snippets of one another’s day-to-day. It was less than ideal. Especially when I got to the point in pregnancy where reaching my toes was out of the question. But we made it work. And we he returned home to stay, he could see it all over my face. These babies were coming sooner rather than later.

Thursday, June 4th & Friday, June 5th – To put it bluntly, I felt like shit these two days. I was experiencing pain in my lower abdomen/pelvic region, I felt especially sluggish, and just not well. I tried to wrap up as many things as possible at work, thinking something might be happening sooner than expected, but tried not to say much about it so as not to unnecessarily alarm anyone.

Saturday, June 6th – Woke up feeling great! We had our birthing class scheduled for this day so we headed to the hospital and spent all day learning about pre-term labor signs, epidurals, birth, taking care of infants, etc. While mostly stuff I already knew, I could see a lot of lightbulbs going off in Justin’s head and he left feeling much more knowledgeable, which made me feel even more ready for these babies to arrive. We were both energized by the class so when we got home that afternoon we finished up a few things around the house, making sure we were as ready for babies as we possibly could be. I continued to feel great during all of this. It really didn’t even occur to me that this could be that sudden burst of energy (nesting) that we’d just learned about in the pre-term labor section of the class. It wasn’t until bed time that night, when the pain in my pelvic area returned, that I thought this might be the real deal.

Sunday, June 7th – I woke up feeling even worse, and in turn, more uneasy. I also had some minor spotting. Nothing to be super alarmed about, but enough to make me pay attention. I had brunch plans with one group of girlfriends, and afternoon plans with another. I was super excited for one last day out with some of my favorite ladies before the babies arrived but it seemed said babies might have other plans, so we headed to the hospital to see what was going on. I truly thought I would go in, have some tests done, and be sent home. Instead, they told me I was 2cm dilated & was being admitted. 2cm isn’t much, and some people sit there for weeks before dilating any further, but with twins it was enough for them to take it seriously & monitor me to see how things progressed.

Around 2:30 that afternoon they gave me a shot of betamethasone to help develop the babies’ lungs in case labor did progress. They also started giving me nifedipine in hopes of slowing down or completely stopping labor. I spent the next 24 hours just lying in bed. It was probably one of the most uncomfortable nights of my life. The babies’ heartbeats, as well as my contractions (the contractions that I didn’t know I was having) were being monitored, which meant super itchy bands were placed around my giant belly and nearly every time I moved, the monitors moved out of place. A nurse would then come in to adjust them. Over and over and over again. I was on a clear liquid diet (and therefore starving) just in case I needed a c-section. Of course I was used to it by now, but there was absolutely zero sleep for me that night.

Monday, June 8th – It seemed the nifedipine was doing the trick so I was moved to an antepartum room after my second shot of betamethasone. The bed in this room was much more comfortable so I actually got a little rest that afternoon. I had some visitors and some real food and went to bed knowing that I was going home the next day. I knew I had to wait until 24 hours after my last steroid injection so I planned to be home in time for dinner.

5am – I all but forced Justin to go to work this day. I was fine. I planned to do nothing but eat & sleep until I was discharged. I went back to sleep immediately after he left for work.

8am – I woke up feeling a little funny. A slight twinge in my side. I quickly scanned social media on my phone & took a look at the cafeteria menu before turning over for a little more sleep.

9am – Breakfast order placed. Contacted a few people to let them know I’d be going home later that day, as well as my boss to let her know I’d be in Wednesday afternoon & planned to work half days the rest of the week. The doctor said there was no reason I couldn’t go about normal activities so I figured I might as well work while I could!

9:15am – Tightening feeling in my belly as I got up to go to the bathroom and then, wouldn’t you know it, my water broke. They ran some tests to be certain it was amniotic fluid but they were really just a formality.

9:30am – My breakfast arrived but I was told I couldn’t eat it. I was being moved back to labor & delivery, and not knowing how things would progress, I wasn’t allowed to eat. Again. I called Justin to let him know what was going on, but told him not to rush, he could work until lunch & then head back to the hospital.

9:45am – Contractions really kicked in, far more intense than what I’d felt before. I secretly wished I’d told Justin to hurry up & get back to the hospital. I was going to need a hand to hold. Luckily he read my mind & called to let me know he was on his way already.

time gets a little fuzzy here but it all went a little something like this – Moved back to labor & delivery, contractions got wayyy more intense very quickly. I was “breathing through them”, rather than talking through them. Nurses kept saying “you’re going to have babies today!” and shit started getting real. At this point we decided it was probably a good idea to come to an agreement on a second boy name. We like to plan ahead, obviously.

Prior to this I was still really on the fence about an epidural. Doctors very strongly encourage one when you’re having multiples and intend to have a vaginal birth. Even under the best circumstances, birth of multiples can easily result in an emergency c-section so an epidural allows you to be that much more prepared should a c-section become necessary. It also allows the delivery doctor to do some not-so-pleasant things to get Twin B out, should it decide to flip once Twin A vacates their home. In my mind, the epidural was the lesser of two evils so I went with it. As luck would have it, my epidural took really well & it was smooth sailing from there. I 101% DO NOT REGRET the epidural.

Contractions progressed really quickly & I think I started pushing around 4pm. Justin & my mom were both there for support. They let me push in the labor & delivery room for awhile (it was about 45 minutes of pushing until Theo’s head started to appear) before wheeling me over to the operating room. Operating room is another precaution for birth of multiples. Luckily both babies remained in the head down position so we had the perfect scenario for a successful vaginal delivery. It seemed like just a handful of pushes before Theo made his debut. He was whisked away by the NICU team, who weighed him & checked him over. Justin got to be a part of all of this, while I remained on the operating table, waiting for Nolan to make his way down. They brought Theo in to meet me briefly before taking him down to NICU. 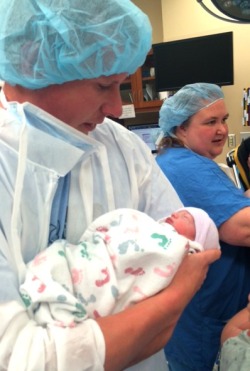 There was a little downtime before I began pushing the second time around and it was during this time that I couldn’t stop thinking about how everything still felt so surreal! But reality struck when it was time to start pushing again and it wasn’t long before Nolan made his way out. Again, handed directly to the NICU team, who recognized some breathing issues & immediately rushed him to NICU. I didn’t get to meet him until a few hours later.

I was sent back to labor & delivery to recover/allow the epidural to wear off and all I could think about was being with my babies, but I’d be lying if I said I wasn’t also thinking about FOOD! Since I knew they wouldn’t let me get out of bed for awhile (this is when that amazing epidural started to feel a little like my worst enemy), I ordered food, inhaled it, and contacted a bunch of family/friends via text to let them know THE BABIES ARE HERE! A couple hours later I was FINALLY allowed to go see my babies. I won’t lie. It was a little scary. I didn’t know much about their condition. I didn’t know what all of the tubes and wires and monitors meant. I hated that they were in isolettes (that’s a fancy NICU word for incubator) and I was afraid to touch them. But I knew in my heart they were exactly where they needed to be. I had high hopes that it would only be for a few days. 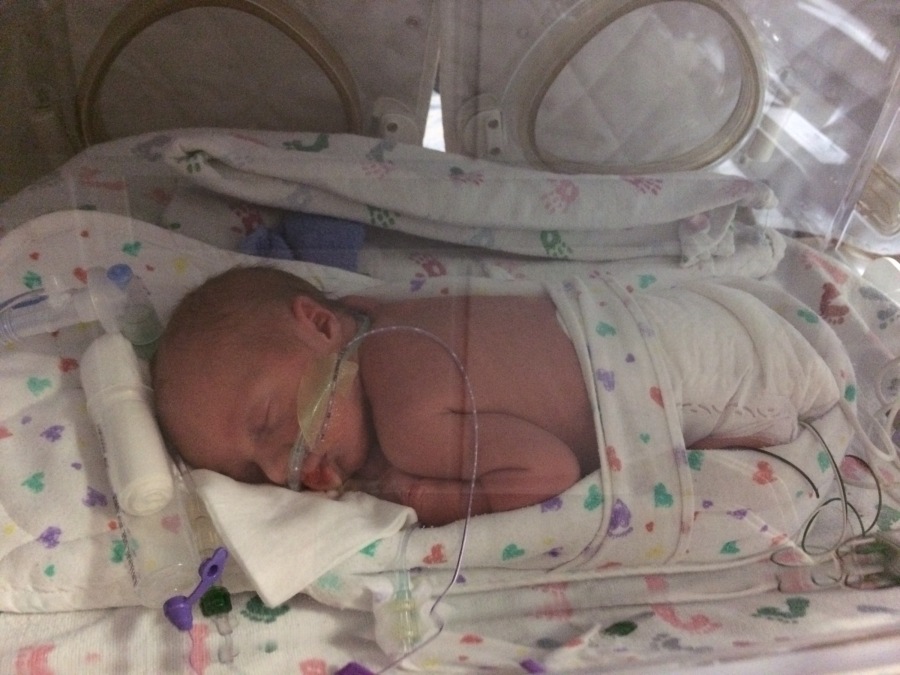 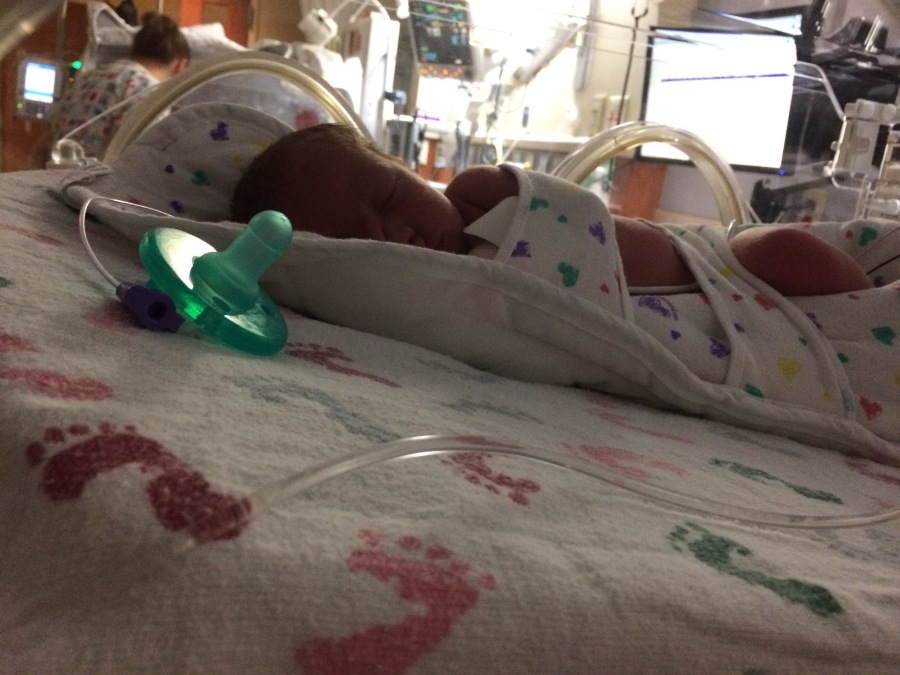 After thirty-four weeks, countless packages of Golden Oreos, far too many sleepless nights, and more Zantac than one person should ever consume, our precious babies were finally here!! And of course, they are worth every single bit of acid reflux, every single morning of desperately wanting to stay in bed because I had finally just fallen asleep, they are worth every single possible crappy moment that could have occurred during pregnancy. After the boys were born, while I was still in the operating room, I made the declaration “I’m ready to do that all over again!” And I meant it. I wouldn’t call my pregnancy a tough one by any means. It was uncomfortable at times, sure. But carrying around 10+ pounds of baby is far worse than delivering two 5ish pound babies. I swear. Some of the hospital staff mentioned that it was a “textbook twin delivery”, and for that I’m incredibly grateful.

Our hospital experience certainly doesn’t end there, as the boys spent three full weeks in the NICU but I write this with one boy fast asleep on my chest and the other nearby in his swing. Most days I still can’t believe they’re mine, nor can I believe the journey we’ve already been on.

Theo and Nolan will be one month old tomorrow and we may just have a little dance party to celebrate what a month it’s been!

2 thoughts on “when your twins decide 34 weeks is long enough.”

Leave a Reply to The One About Breastfeeding Twins. Kinda. Cancel reply